Many HO scale collectors hear “brass trains” and automatically think of Pacific Fast Mail, an early, widely known importer. Recently I came across my 1969 Pacific Fast Mail catalog, so I thought I’d share another post, this one on some of their steam locomotive offerings of the time.

Over time, the general quality and precise, highly-detailed construction of brass model trains increased substantially, along with the cost: today, a top-of-the-line HO scale brass model train can come with a price tag of several thousand dollars. Though the market fluctuates, earlier made brass locomotives can still net impressive prices far above their original retail stickers.

Enjoy the walk down memory lane, courtesy of a few highlights of the PFM catalog offerings of 1969… 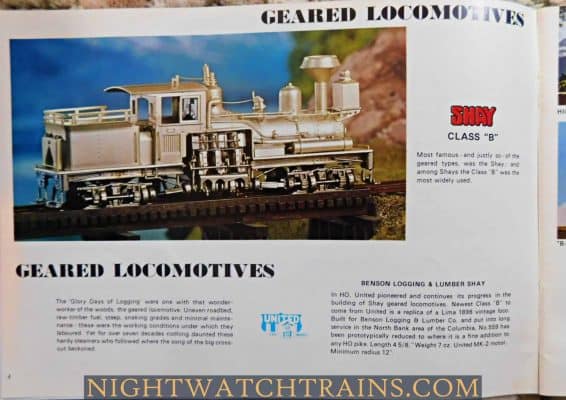 The infamous Class B Shay was the most widely used locomotive, with Pacific Fast Mail stating that United pioneered and was continuing its progress in the construction of HO scale Shay geared locomotives. At the time, the newest United Class B was a replica of an 1898 Lima locomotive constructed for Benson Logging & Lumber Co. The Lima No. 559 enjoyed long service in the North Bank area of the Columbia and “has been prototypically reduced to where it is a fine addition to any HO pike.”

Hillcrest No. 1 was United’s popular model of the 1921 Lima 25-ton Class B Shay. The compact HO scale steam locomotive measured in at just 4.75” long and weighed 8 oz.

And the “B-2” represented United’s larger 2-truck, measuring out at 5.75” and weighing in a bit more than the Hillcrest No. 1 at 12 oz. Trucks could be converted to HOn3.

On the following page, the Vulcan Duplex was depicted. Though it was not actually a geared locomotive, the 0-4-4T was architected to work alongside Shay, Climax and Heisler types in industrial settings that demanded compact power.

I love this excerpt on switcher locos: 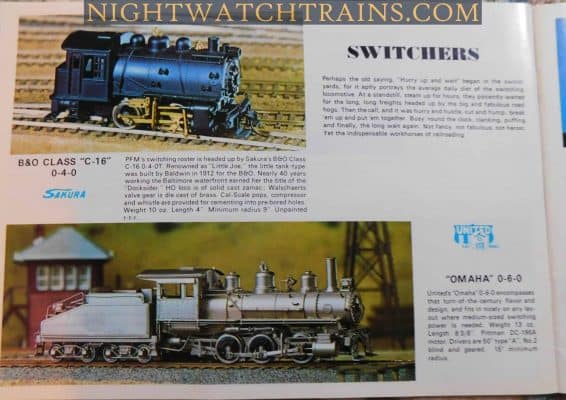 “Perhaps the old saying, “Hurry up and wait” began in the switch yards, for it aptly portrays the average daily diet of the switching locomotive. At a standstill, steam up for hours, they patiently waited for the long, long freights headed up by the big and fabulous road hogs. Then the call, and it was hurry and hustle, cut and hump, break ‘em up and put’ em together. Busy round the clock, clanking, puffing and finally, the long wait again. Not fancy, not fabulous, not heroic. Yet the indispensable workhorses of railroading.”

Dubbed “Little Joe,” the Sakura B&O Class C-16 0-4-0T sat at the helm of Pacific Fast Mail’s switchers. It was built in 1912 for the B&O railroad by Baldwin, where it eventually gained the title of “Docksider” for her decades of work along the Baltimore waterfront. This HO scale loco was crafted of solid cast zamac, weighing in at 10 oz and measuring 4” long. 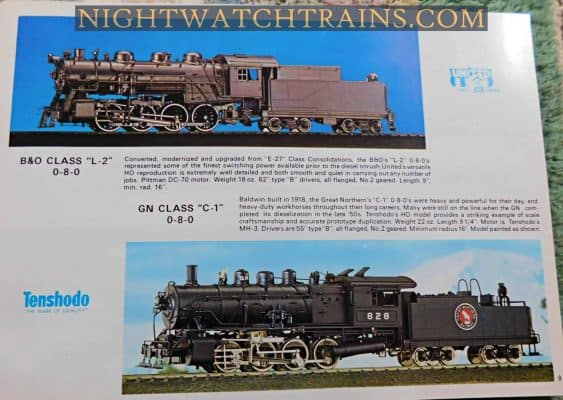 If your HO scale model railroad layout needed mid-sized switching power back in 1969, the United Omaha 0-6-0 was a smart choice, according to Pacific Fast Mail. Just over 8” long and weighing 13 oz, the Omaha 0-6-0 locomotive boasted “turn-of-the-century flavor and design.”

And then there was the B&O Class L-2 0-8-0, which represented “some of the finest switching power available prior to the diesel onrush.” The B&O 0-8-0 HO scale locomotive by United measured in at 9” and tipped the scales at 18 oz.

Tenshodo produced the HO scale model loco of the Baldwin-crafted Great Northern Class C-1 0-8-0, a “striking example of scale craftsmanship and accurate prototype duplication,” said PFM. The Great Northern steam locos were considered heavy-duty powerhouses, and were still on the line when Great Northern finalized its dieselization towards the end of the 1950s era.

Last but not least for today, the Climax Locomotives – 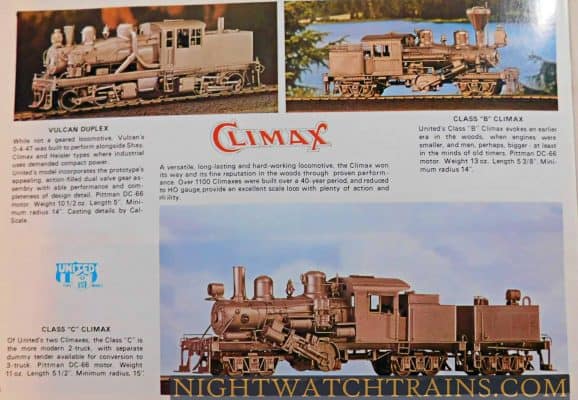 Adaptable. Hard-working. Built to last. The Climax earned its reputation “in the woods through proven performance.” Over four decades, 1100+ Climaxes were architected, and like their real-life counterparts, HO gauge brass models boasted “action and ability.”

Featured in the PFM catalog were the earlier Class B Climax by United that “evokes an earlier era in the woods, when engines were smaller, and men, perhaps, bigger – at least in the minds of old-timers.”

Class C Climax was the more modern 2-truck model with a separate dummy tender available for conversion to 3- truck. Both came with the Pittman DC-66 motor.

Pacific Fast Mail certainly wasn’t the only importer of brass model trains, but they were arguably one of the most well-known. Today, many model railroad enthusiasts choose to upgrade these older HO scale locomotives to remotor, install DCC and/or repaint (and sometimes, weather).

I’ll leave you with an 1802 quote from Thomas Jefferson: “The introduction of so powerful an agent as steam to a carriage on wheels will make a great change in the situation of man.”