Summary: Welcome to the HO Train Showcase Series by Nightwatch Trains, where we’ll highlight a favorite HO Scale locomotive and provide a history on the real-life model.

What do these have in common?

The man behind some of their most iconic designs.

Before that was the Hoover model 150 vacuum cleaner in 1936.

And then there was the New York Central Railroad.

About two years after the NYCRR’s streamlined Mercury train (both locomotive and passenger cars) in 1936 came the ultimate Art Deco representation: the NYC Hudson locomotive for the 20th Century Limited.

Behind each of these American icons was an industrial design extraordinaire

​Early in his career, Henry Dreyfuss demonstrated that a modern design could enhance the New York Central’s image – and boost their bottom line. The rest, as they say, is history.

Dreyfuss designed the Mercury train sets, a family of NYCRR’s daytime streamliner passenger trains that ran between Midwestern cities. Considered a standout example of Streamline Moderne design, it was this early success that landed Dreyfuss the commission for the 1938 redesign of the now-infamous 20th Century Limited.

Dubbed “The Most Famous Train in the World,” the streamlined NYC Hudson locomotive for the 20th Century Limited would ultimately become what many railroad buffs continue to call the “world’s greatest train.”

“Dreyfuss worked with almost pathological restraint, transcending the mindless fashion for streamlining, mixing images of the Machine Age and the Stork Club as only he could. The Century’s steam locomotive wore a shroud often compared to a Spartan warrior’s helmet, its six huge driving wheels pierced with holes and painted aluminum to attract the eye; and at night the churning wheels were lighted.”

Dreyfuss managed to architect the perfect blend of high drama and profound simplicity into one memorable design that gave passengers the red-carpet treatment – literally. Many folks may not realize where the term “red-carpet treatment” came from – so here’s a little history: In NY and Chicago, passengers walked to the train on a luxurious crimson red carpet – hence the well-known phrase. 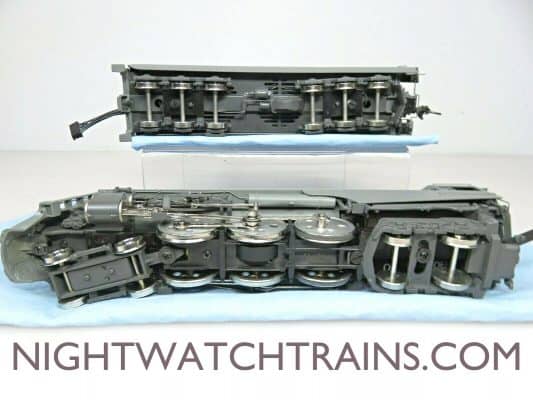 As iconic as his work was, a lot of Dreyfuss’s designs were overlooked.

“Everybody knew the train, but not its designer,” wrote Stephen Drucker in Architectural Digest.

It is often said that Dreyfuss’s locomotive designs garnered so much attention that his contribution to passenger cars have often unnoticed. 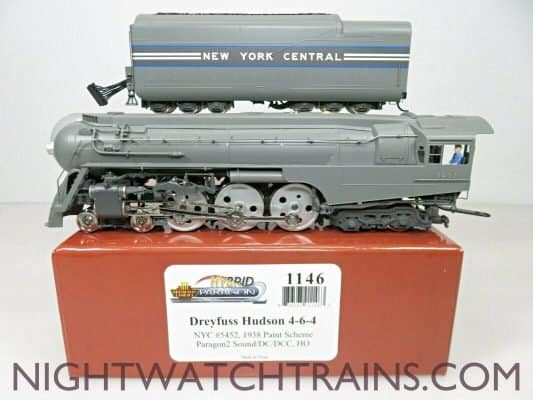 One of our favorite HO scale renditions of the infamous 20th Century Limited Dreyfuss Hudson is Broadway Limited Imports BLI-1146 #5452 with the 1938 paint scheme.  Some 70 years after its June 15, 1938 initial run from New York to Chicago (in only 16 hours), Broadway Limited first debuted their outstanding HO scale version of the beloved steam locomotive– a brass locomotive and tender body with a die cast chassis.

Are there any Hudson steam locomotives left anymore? 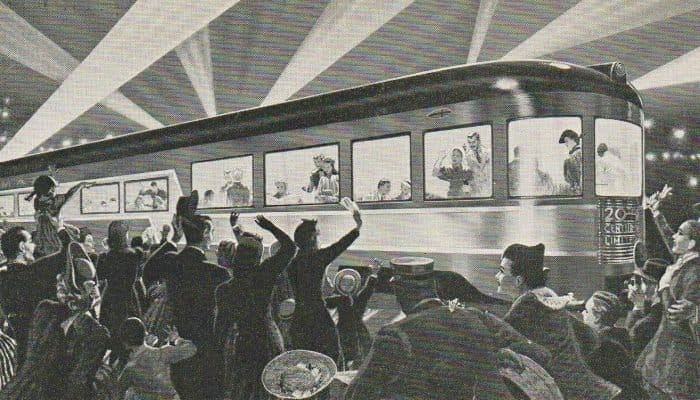 In short, the answer is no. None of the New York Central Railroad’s Hudson units survived – all were scrapped when the railroad went to diesel. As diesel began to reign on the rails in the mid-20th Century, J-Class Hudson locos were eventually retired. The only shred that remains is at the Steamtown National Historic Site in Scranton, Pennsylvania, which houses a converted tender from J-1d 5313.

Though the glory days of steam (and the “red-carpet treatment” enjoyed by passengers) have long  since vanished into the mists of history, the Hudson steam locomotives live on in the hearts and minds of railroad enthusiasts, historians and industrial design buffs everywhere.