Model railroading has long been a cherished hobby for children as well as adults. Its immense popularity is twofold: It lets adults be kids again – and allows kids to dream of being grownup railroaders.

From O Gauge to HO Scale: A Brief History

The roaring twenties was a dramatic time in history, ushering in powerful economic, social, and political changes. For the very first time in the nation’s history, more Americans lived in cities than on farms.

The nation’s wealth soared, creating a new era of a consumer society: people were able to afford things other than just basic necessities – and indulging in hobbies became an enjoyable pastime.

Lionel Trains was already a part of the hobby scene, but their O scale was large, detail wasn’t a priority, and the train and track needed a larger area to be displayed on and run. But changes were in the wind: the roar of the twenties collapsed into the Great Depression – and the economic situation gave birth to the HO scale.

What Does HO Scale Stand For?

HO is a derivative from the German Halb-null (half zero). The HO scale of 1:87 is approximately half that of the larger O scale.

Did you know? The “O” in HO is technically inaccurate – originally the number zero was used to recognize trains that were smaller in scale than 1. Nevertheless, the letter O (not the number 0) became the popular way to refer to the scale. It remains the common, standard way even today when referring to “HO scale.” The same is true of “O” scale.

Because of the Depression and its economic impacts, many of the larger scale trains ceased production during the 1930s. Consumers no longer had the cash to spend on them, and they were becoming more space-conscious.

It was the severe economic pressures of the Great Depression that gave birth to HO scale: they cost less than their larger counterparts. As a result, many of the larger scale trains saw their demise during the 1930s since hobbyists could no longer afford them. 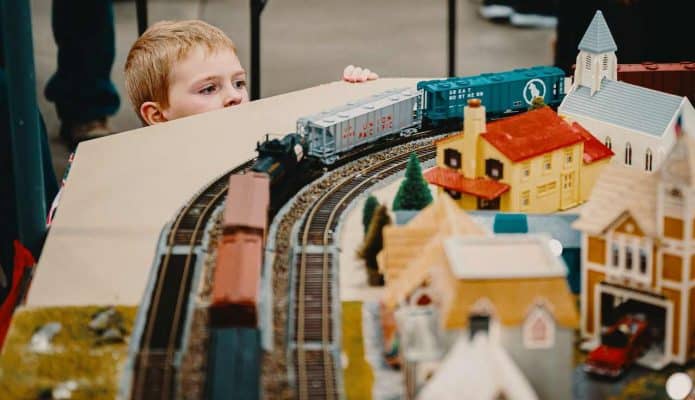 The first HO trains debuted in the 1930s in the United Kingdom, mainly as a substitute to OO scale, but never rose to popularity. Britain preferred the OO scale – which runs on the same track as HO – but the trains are scaled at 1:76.2, a less accurate scale than HO. Today OO scale prevails in the UK.

During the 1940s, O and HO gauge were fairly equal in popularity, but by the 1950s, HO gained in popularity as model railroad hobbyists wanted detail and realism – not just children’s toy trains.

And detailed they are. HO scale’s smaller size boasted many more realistic details than the old standard gauge trains and allowed train layouts to fit in smaller spaces. During the 1950s, HO was becoming more popular as the decade progressed and eventually outpaced O scale to became the leader. Marx toys and Lionel, large renowned toymakers, eventually added HO to their product offerings.

In 1951 and 1952, locomotives produced from detailed pressure die-castings debuted, notably the HO scale Mantua Pacific, which was made from zamac. The era saw a wider range of steam motive power, ranging from 0-4-0 to the Bowser 4-6-6-4.

Brass Locomotives Appear on the Market

During this time, along with the die cast models, Japan produced its first brass locomotives. Modest and without detailing, they were manufactured from brass stampings and etchings and were imported and sold by International Model Products.
These early brass locomotives weren’t of very high quality and proved unreliable. Not just five years later, a higher quality imported brass locomotive by Pacific Fast Mail debuted a two truck Shay in HO scale.

In the decade that followed, over 100 imported brass locomotives were produced. For each 15-20 brass locomotives that were imported, one die-cast model was made in the U.S. Because of costly tooling, US manufacturers had to rely on high volume. (In the late 70s, brass costs escalated, eventually making them treasured collectibles).

Polystyrene plastic engines appeared in the late 1950s in HO scale. The first plastic models in the U.S. came from Italian manufacturer Rivarossi. These were priced far below domestic diecast zamac models and boasted fine details. Also offered were large articulated locomotives that allowed negotiating 18” radius curves, which was ideal for smaller layouts.

By the 1970s, plastic engines were made in Hong Kong, while the U.S. had difficulties with plastic locomotives. Athearn, famous for low-cost diesels, introduced three steam engines that couldn’t compete with the imports and were later taken off the market.

From 1975 to the mid-1990s, the popularity of model steam locomotives saw a downslide. Brass was very expensive, yet the plastic imports with cast-on detail weren’t favored with enthusiasts. A few producers went out of business. Model Die Casting and Mantua survived those times, while Bowser enjoyed popularity by offering super detailed parts as options with their basic kits. The steam locomotive dipped in popularity as many modelers converted to diesels.

But 1997 saw the arrival of a high-quality plastic steam locomotive. Plastic steamers had been around for years, but their detailing – pipes, fittings, etc. – were cast as part of the boiler. Cast on piping was only half round and were not nearly as real looking as those on the brass imports.

The Bachmann 2-8-0 boasted separately cast plastic piping applied by hand to the boiler, along with a can motor with a flywheel. It also boasted a printed circuit board in the tender for a Digital Command Control (DCC) system that was just being introduced to the market around that time.

Athearn and Life-Like followed Bachmann. High quality plastic steam engines saw a boon in popularity, with Life-Like producing Proto2000, a 2-8-8-2 Norfolk & Western articulated with tons of detail. The locomotives were designed with both sets of pivoted drivers so sharper turns were enabled.

HO Scale – the King of the Model Railroad

It was during the 1960s that HO really become king. It gained over O scale, even surpassing the A.C. Gilbert, which produced the popular S scale American Flyer. Lionel then began producing HO scale trains.

Today, HO is the prominent model railroad scale, a favorite in North America and Europe. Standards for HO are overseen by the National Model Railroad Association (NMRA) and MOROP (European Association of Modelrailroader and Railroad Friends).

MOROP certifies HO as exactly 1:87. The NMRA defines HO as 3.5mm to the foot, or 3.5mm represents 304.88mm. This results in a rounded-up ratio of 1:87.1. Incidentally, many manufacturers produce cars and trains and market them as HO Scale, but their scale in not technically correct. In slot cars, for instance, HO refers to the track the cars run on. The cars themselves range from 1:87 to 1:64 in scale.

Some locomotives are sold with a multifunction decoder already installed, which controls motor, lighting functions and sound. Others can be DCC without sound, and for those who are budget conscious, some locomotives may be purchased as DCC-Ready. 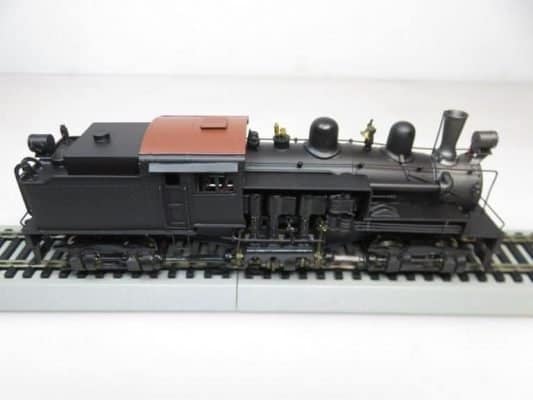 3 Reasons Why HO Scale Still Reigns on the Railroad

…and the list goes on. Even children love the smaller scale of HO trains because their size allows them to still be played with just like any other toy.

With such a dynamic range of choices and a legacy that’s hard to compete with, it’s no wonder HO trains remain so popular.

See what HO scale trains we have in stock today. Looking for HO brass locomotives? Browse our curated collection.