Logging has always been demanding – and dangerous – work.

Many have long forgotten what laborious work those that lived well over 140 years ago exerted in getting timber to the market.

Before the use of logging trains, loggers relied on horses, oxen, wagons, and rivers to haul and transport logs. It worked – but not without plenty of pitfalls. Wood was oftentimes damaged by the water, logs could become lost in downpours or mired in mud. Timber in mountainous ranges or remote areas was not easily accessed.

The advent of the steam locomotive and forest railways transformed the industry. While Ephraim Shay is considered a pioneer in the geared steam locomotive, others followed with their own inventions.

Born on July 17, 1839, in Sherman Township, Ohio, Shay is credited with bringing the concept of a geared steam locomotive to the forefront.

His advanced education at a time when few saw formal education became a solid foundation for his future successes in his work as a schoolteacher, logger, merchant, self-taught railroad engineer, town clerk, railway owner and inventor.

After serving in the Union Army during the Civil War (1861-1865) as a medical steward, Shay married his wife Jane in 1864. The couple moved to Ionia County, Michigan, and settled on a farm until 1869 when the family relocated to the Township of Sunfield in Michigan. Here Shay ran a steam sawmill until 1873.

After clearing all the timber from his tract, Shay then moved to the Manistee River basin in Michigan, where he became the proprietor of a general store and sawmill which was located near Haring, a town just settled the year before.

Well familiar with the difficulties of logging, Shay built his first tramway in 1875, a set of rails that formed the route for hauling out logs. A simple design, his tramway consisted of wood rails driven by spikes into a 26-inch gauge over cross ties.

It enabled Shay to log year-round, but the tramway was not the safest operation: it was extremely dangerous for horses. He was well aware that he needed to improve upon his tramway.

Ever the inventor, the lumberman built his geared steam locomotive in 1881 and was issued a patent for it that same year. Designed specifically for logging railroads which often involved steep grades and sharp curves, each small wheel was driven, enabling it to pull leavy loads despite their size. It could deliver equal torque directly to wheels on both sides of the engine simultaneously.

His locomotives were two-truck with eight wheels, or three-truck with twelve wheels. 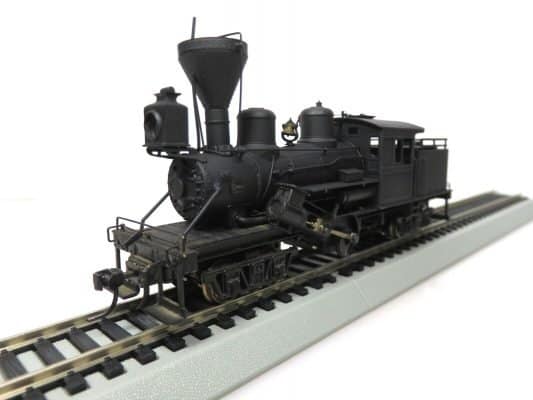 Lumberman Charles Scott ran a logging tram road between 1875 and 1878. He had a home-made locomotive haul logs to the Scott and Akin Mill in Spartansburg, PA. Scott’s ingenuity led to the Climax locomotive: his first was a primitive looking invention that hardly resembled a locomotive at all.

Mounted on the top of a platform frame was a vertical boiler and a two-cylinder marine type engine. It was supported by a four-wheel truck at each end. At one end, a round water tank was placed; a fuel bin on the other end.

With a differential arrangement similar to a car, gears transmitted power to the axles, which was driven by a line shaft joined to the engine via a two-speed gear box. The truck frames, along with the frame and canopy type cab, were all made of wood. 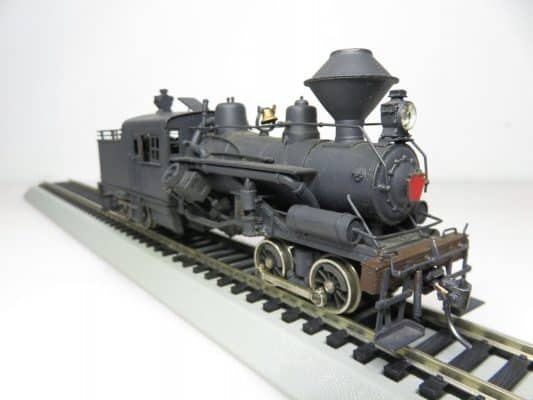 With Shay and Climax in the forefront, Heisler Locomotives appeared in 1892. Similar to a Climax locomotive, Charles Heisler acquired a patent for his design that boasted cylinders slanted at a 45-degree angle inwards. The center shaft drove one axle per truck since the wheels in each truck were joined with a side rod.

The very first Heislers were built by The Dunkirk Engineering Company (Dunkirk, New York). At that time From 1894 to 1904, the Stearns Manufacturing Company of Erie, Pennsylvania started to produce Heislers, and did so until 1904. By 1907, Heisler Locomotive Works was formed, ultimately producing Heisler locos through 1941.

Like Shay locomotives, Heislers were produced mainly in two and three truck models in sizes spanning from 17 to 95 short tons. 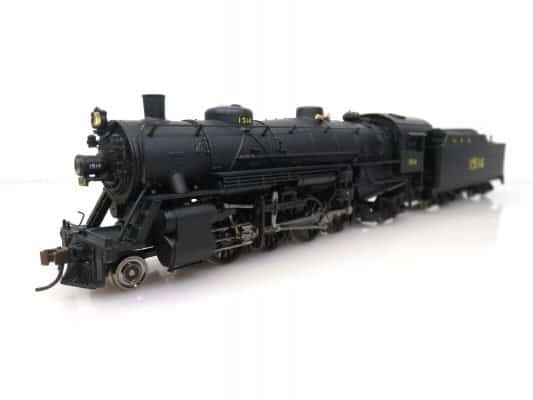 Founded in 1831 by Matthias Baldwin, the Baldwin Locomotive Works was originally located in Philadelphia, PA where it operated for 71 years. In 1912 the company moved to a new plant in Eddystone.

Baldwin earned its reputation for constructing steam locomotives for the Pennsylvania Railroad, the Atchison, Topeka & Sante Fe, the Baltimore and Ohio Railroad and others in North America. They additionally supplied overseas buyers from England to Egypt.

Baldwin was cutting edge at the time for locomotives with 2-8-2 Mikados, and its unique ability to construct small amounts of unique designs, such as the Cab Forward 4-8-8-2, built for the Southern Pacific.

44 specialized locomotives were built by Baldwin between 1909 and 1937. These locos were either originally architected for – or later transitioned to –  the purpose of hauling logs along curvy railroads with steep grades.

But by the 1940s, steam locomotives were seeing their demise. Lima joined forces with Hamilton, which built engines in an attempt to edge into the diesel market, but wasn’t very successful. As a result, they merged with Baldwin in 1950 to form the Baldwin-Lima-Hamilton Corporation, but by 1956, it had stopped production of common carrier size locomotives. 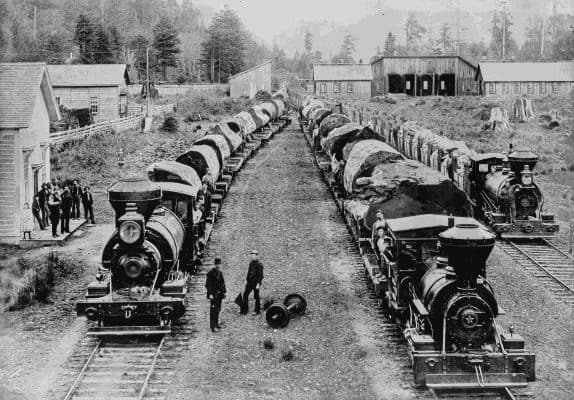 His gasoline fueled locomotive proved so successful that during WWI his plant was almost entirely producing orders for the government. In 1929, Whitcomb made history by designing and building the largest gasoline-electric locomotive ever been presented to the American railroads.

Success faltered and in 1931 the company filed for bankruptcy. It was acquired by the Baldwin Locomotive Works of Philadelphia, which ran its new company as Whitcomb Locomotive works until 1940, when it took full ownership and Whitcomb became a division of the parent company.

WWII saw an increase in demand for locomotives worldwide. As a result, the factory area doubled by 1942. Industrial locomotive production was moved to Baldwin’s Eddystone Works in PA.

Check out this image circa 1940 of the Kosmos Logging Company’s Whitcomb locomotive No. 2, with crew and flatbed railroad cars packed with logs.

Paterson, NJ-based Rogers Locomotive Works was formed in 1832, but didn’t manufacture its first locomotive until 1837, named the Sandusky. Constructed for the Mad River & Lake Erie Railroad, the locomotive gave birth to many others – by 1854, the company had built 550.

Rogers Locomotives was successful through the Civil War and right into the 1880s. Over time, they built over 6,000 steam locomotives for railroads in the US and around the world. Well known in the industry with an honored reputation, Rogers Locomotive Works was purchased by ALCO in the early 1900s. 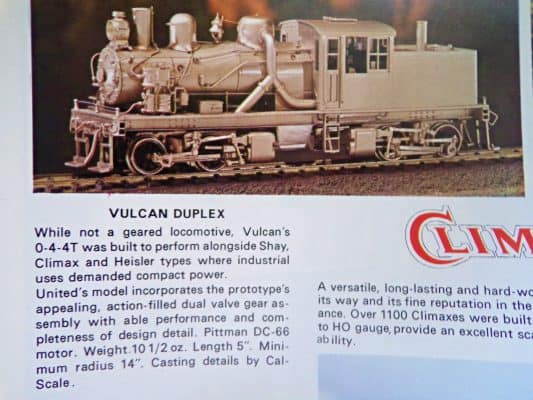 Logging Locomotives: The End of the Era

It was a gradual demise. Diesel trains began to replace steam in the late 1930s. It took diesels ten years to become the standard motive power used, as they were easier to maintain and more efficient.

Logging locomotives live on – chugging methodically along the tracks of many a model railroad. Some of our favorite models are Pacific Fast Mail (PFM) for brass logging locos, and Bachmann, which produced popular metal bodied locomotives.

Once a prominent distributor of brass steam locomotives from Japan, changes to the industry coupled with rising costs led to a production shift from Japan to Korea, and Pacific Fast Mail ceased their import business long ago.

Decades later, collectors of brass trains continue to appreciate Pacific Fast Mail locomotives. Some favored models were the Vulcan Duplex, United Class B Climax, and the B-2 and B-3 Shay logging locos.

We’ll leave you with a quote from one of PFM’s original catalogs:

“The ‘Glory Days of Logging’ were one with that wonder-worker of the woods, the geared locomotive. Uneven roadbed, raw-timer fuel, steep, snaking grades and minimal maintenance – these were the working conditions under which they laboured. Yet for over seven decades nothing daunted these hardy steamers who followed where the song of the big cross-cut beckoned…”

See what brass logging locomotives Nightwatch Trains has in stock here. Have a brass train collection to sell? Get a quote today. We specialize in collectible brass trains.