To see other posts in this series, 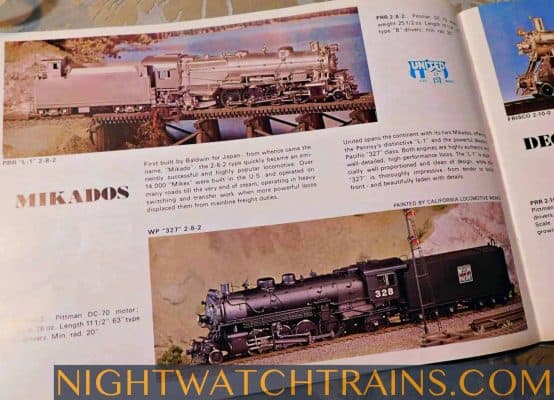 Architected by Baldwin for Japan, the Mikado 2-8-2 type soared to success and popularity. There were more than 14,000 “Mikes” manufactured in the US, and they worked many a railroad until the very end of the steam locomotive era, “operating in heavy switching and transfer work when more powerful locos displaced them from mainline freight duties.”

“Both engines are highly authentic and well-detailed, high-performance locos. The L-1 is especially well- proportioned and clean of design, while the 327 is thoroughly impressive – from tender to boiler front – and beautifully laden with details,” boasted PFM. 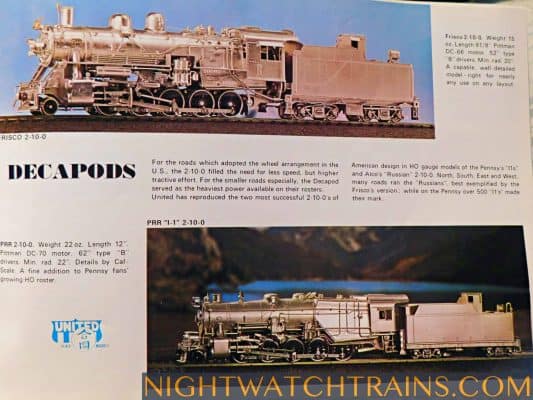 Deck the Rails With Decapods

“For the roads which adopted the wheel arrangement in the US, the 2-10-0 filled the need for less speed, but higher tractive effort. For the smaller roads especially, the decapod served as the heaviest power available on their rosters,” explained PFM.

Two of the most successful 2-10-0’s of American design, the Pennsy’s “11s” and Alco’s “Russian” 2-10-0, were replicated in HO scale by United. “North, South, East and West, many roads ran the “Russians”, best exemplified by the Frisco’s version; while on the Pennsylvania RR over 500 “11s” made their mark,” said PFM at the time.

The highly detailed Frisco 2-10-0 locomotive was a model that Pacific Fast Mail described as an ideal choice for just about any model railroad layout. The Frisco came with a Pittman DC-66 motor at the time, while the PRR I-1 featured in the spread was fitted with the Pittman C-70 motor. 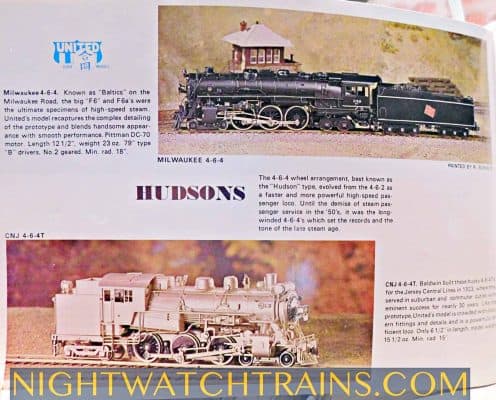 The now infamous “Hudson” type locomotives were developed from the 4-6-2 as a speedier, more robust passenger loco. “Until the demise of steam passenger service in the 50s, it was the long-winded 4-6-4’s which set the records and the tone of the late steam age,” noted PFM.

Featured in the Pacific Fast Mail catalog spread were the Milwaukee 4-6-4 and the CNJ 4-6-4T. Dubbed “Baltics” on the Milwaukee Road, the big F6 and F6a’s were the definitive examples of high-speed steam locomotives. According to PFM, United’s HO gauge model captured “the complex detailing of the prototype” and combined a striking appearance with smooth performance.

Baldwin-built CNJ 4-6-4T’s were developed for the Jersey Central Lines in 1923, where they became renowned for their work in suburban and commuter duties for several decades. Like the original, United’s powerful, efficient replica was packed with then-modern fittings and fine detailing. It was just 6.5” long, in comparison with the Milwaukee 4-6-4, which measured in at 12.5” long.

Pacific Fast Mail was, for a long time, considered one of the top importers of quality HO scale brass models. In fact, the PFM name is basically synonymous with brass trains within the model railroading industry.

As many HO scale enthusiasts know, these old brass locos were built to run. Today, upgrades are common, with NWSL components being a popular choice to modernize earlier model brass trains. Even originals will still run – sometimes after years of storage – with a bit of care and maintenance.

See what NWSL products we’ve got in stock for your upgrades...