Recently I came across the 13th Edition of the Pacific Fast Mail catalog, complete with a price list dated June 1, 1969. I thought I’d share a few excerpts from this relic of the past. 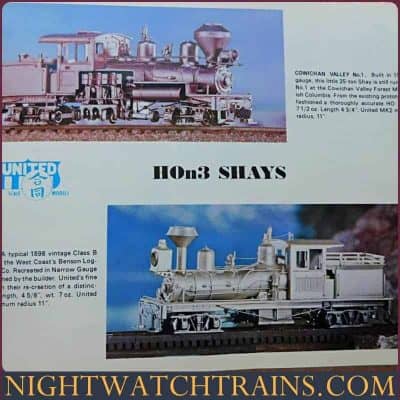 Brass HO scale model trains have long been popular among collectors because of their often intricate detailing and high quality construction. This catalog really shows the incredible detailing even on these earlier models. Pacific Fast Mail (PFM) was once considered to offer top-of-the-line steam locomotives that ran well and featured excellent detail.

United models came ready-to-run, unpainted, while Tenshodo models were offered painted as seen in the PFM catalog, unless it was noted otherwise. For their Fujiyama models, potential buyers were directed to view the text and accompanying photos for each model.

There is an interesting text blurb in the back of the catalog that reads: “Completed models are extremely difficult to pack and ship safely, and irreparable damage is likely to result during transit.” 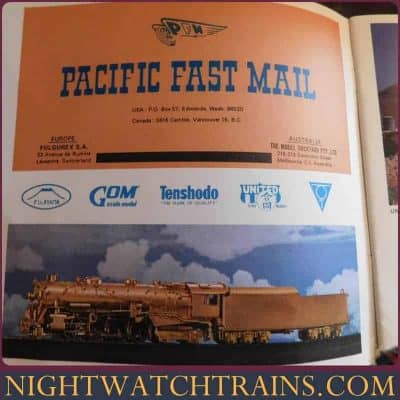 Overall construction: According to the catalog, “Basic model construction is of formed and soldered sheet brass.” Drop-hammered brass was utilized for heavier parts like a truck frame. Cal-Scale brass investment fastings were employed for highly detailed components. Plastic was used on the floors of Tenshodo passenger cars.

For motors: all were 12V DC permanent magnet type – here’s a quick breakdown… 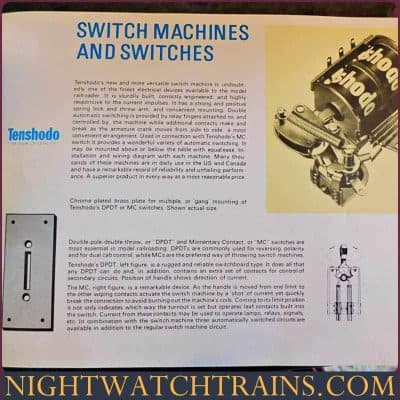 And for the drive: A laminated phenolic and matching precision steel worm enclosed in a covered diecast gear box with spherical, oil-absorptive bronze gearings was the standard on all standard gauge rod locomotives. The only exception was the United V&T 4-4-0.

An excerpt from the Pacific Fast Mail catalog:

“Tenshodo’s new and more versatile switch machine is undoubtedly one of the finest electrical devices available to the model railroader. It is sturdily built, correctly engineered, and highly responsive to the current impulses. It has a strong and positive spring lock and throw arm, and convenient mounting. Double automatic switching is provided by relay fingers attached to and controlled by the machine, while additional contacts make and break as the armature crank moves from side to side, a most convenient arrangement. Used in connection with Tenshodo’s MC switch, it provides a wonderful variety of automatic switching.”

At the time, Pacific Fast Mail said that thousands of such machines were used daily in North America and boasted a strong record of dependability and unmatched performance.

The PFM catalog goes on to state that their double-pole-double-throw (DPDT) and Momentary Contact (MC) switches were “essential” in model railroading. DPDTs were intended to reverse polarity and for dual cab control; MCs were a frequently chosen method to throw stitch machines.

What Happened to Pacific Fast Mail?

As many model railroad enthusiasts know, PFM was a widely known distributor of brass steam locomotives from Japan for decades, focusing largely on HO scale. Industry changes and rising costs led to a production shift from Japan to Korea, and Pacific Fast Mail ceased their import business. A 2016 My Edmonds News article gives an in-depth look into this well-recognized early importer of brass trains.

By the 1970s, times were changing. Wages increased in Japan. Locomotives became more expensive to produce. And this produced a ripple effect right down to the hobby shops that often kept models in their storefronts, allowing customers to see them in person. Though manufacturing shifted to Korea, the overall quality wasn’t on par with earlier models. 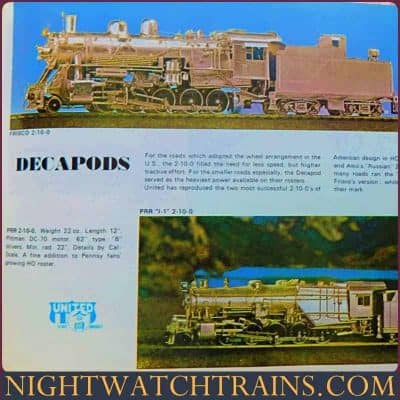 It was never a large company, Sean Drew said, with a work force that peaked at about 30 people in the mid-1970s and then dwindled to just Don Drew by 2003.

In a company history he wrote for Dan Glasure’s “The Brass Train Guide Book” in 2007, Don Drew grew whimsical, imagining a touch of immortality for his work.

“Perhaps 1,000 years from now, railroads will be extinct, but their place in history will be recognized, as well as remembered through these beautiful brass trains.”

Indeed, railroads probably will be extinct 1,000 years from now – and though imaginative, maybe Mr. Drew wasn’t too far off to suggest that part of the illustrious history of the railroad will be immortalized in those memorable brass trains…

Today, earlier era brass trains may not be as widely used in model railroad layouts, but for the folks who appreciate these old gems, NWSL products remain a popular, cost-effective way to upgrade those mighty steamers.