Summary: Welcome to the HO Train Showcase Series by Nightwatch Trains, where we’ll highlight a favorite HO Scale locomotive and provide a history on the real-life model.

We recently came across an old favorite book, “Pennsy Power: Steam and Electric Locomotives of the Pennsylvania Railroad 1900-1957,” a treasure written in 1962 by Alvin F. Staufer. If you’re fortunate enough to get your hands on a copy of this long-out-of-print resource, it’s packed with original black and white photos, and even 32 color repros of the infamous Pennsylvania calendar paintings from 1925-1958.

Therein is some great detail on the famous but short-lived steam freight locomotive, the Pennsylvania Railroad’s (PRR) Q2, which is what we’ll be covering here. The first Q2 was the 6131, which became a prototype for 25 additional units which numbered 6175-6199.

From Q1 to Q2 Class Duplex Locomotives: A Brief History

In 1942, the Q1 that rolled out had opposed cylinders pushing a 4-6-4-4 wheel arrangement. Just two years after in 1944, the Q2 came on the scene as a totally revised Duplex with normal cylinder locations driving a 4-4-6-4 wheel arrangement. This second prototype addressed a number of flaws that were identified with the Q1. And the class Q2 locomotives began their brief reign.

When the Q2 boasted impressive power at test plant trials, a Lima order for 25 more 2-10-4’s was quickly cancelled – and an order of Q2’s were built by Altoona Works between 1944-45. 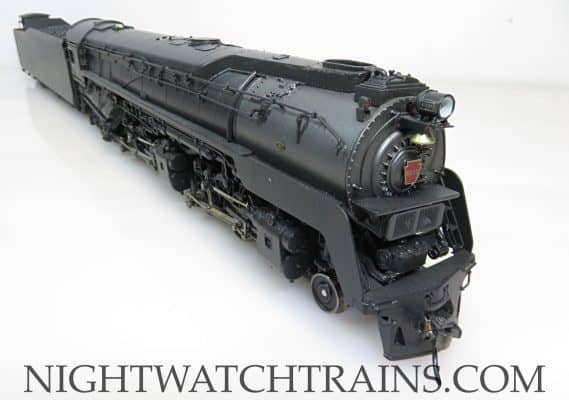 Class Trivia – See if You Can Answer These 5 Questions

Q: What was a notable Q Class peculiarity?

A: Not typically seen on simple engines of the era, the Q Class featured front & rear sets of cylinders that had different dimensions to power differing numbers of drivers.

Q: What curious “new” feature did the Q2’s boast that didn’t quite work as well as intended?

A: They had a American Brake Shoe wheel slip controller – when either set of drivers slipped more than one-half revolution, the controller automatically terminated the steam supply. This was done by activating a butterfly valve in the supply line. After slippage was halted, steam was returned. In reality, the whole concept wasn’t at all as efficient.

A: That was # 6175 – and that was the peak figure ever recorded for any steam locomotive, anywhere. (this according to Staufer’s 1962 book)

Q: What set the Q2’s apart from the pack?

A: They didn’t just boast of awesome power and speed: the robust 4-4-6-4’s steamed off with more tonnage than any other Pennsy engine had ever hauled.

Q: Where might one have caught a glimpse of the elusive Q2 steam locomotive back in the day?

A: Although they were mostly spotted steaming along the PRR west of Pittsburgh, the powerful Q2s also made their way further east to areas like Horseshoe Curve, on what is now a three-track railroad curve on Norfolk Southern Railway’s Pittsburgh Line in PA. You might have also been fortunate to spot a Q2 thundering through her hometown of Altoona, PA.

Most wouldn’t deny that 1940s era locomotives were striking examples of the Golden Era of Steam. And the Q2’s didn’t disappoint – the PRR made sure to outfit them with every imaginable mechanical advantage available at the time.

According to Staufer, here are some quick specs on the Pennsy Q2 locomotive:

Broadway Limited Imports manufactured some pretty incredible brass models – they were 100% brass composition with plastic brake shoes that the company suggested were intended to aid in more dependable operation. If you’ve had the privilege of owning one of these outstanding units, it’s likely to have become a true gem in your collection.

BLI worked with the Pennsylvania Historical Society to produce: 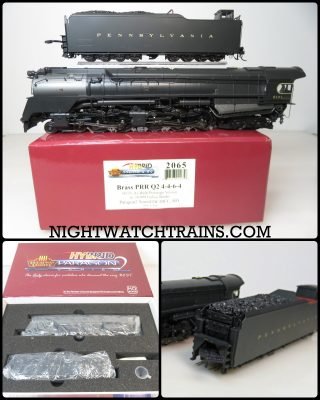 Citing the 1lb 10oz weight, Broadway Limited pondered the original powerhouses saying, “…she has the power to pull long freight trains single-handedly, just like the Q2 did in real life!”

You can read more in detail about the Broadway Limited version of the Q2 here. Below is a summary of some key highlights of BLI’s Q2 locomotives, which they assert may have represented the very embodiment of “super-power steam locomotive design.”

Truly, the features of Broadway Limited’s Brass Q2 Locomotive are too many to list…but here are just a few:

In addition to Broadway Limited Imports, other companies have also made their own HO scale brass models of the famed Q2 locomotive over the years, such as:

For an HO scale Pennsylvania Railroad 4-4-6-4 Q2, values can run from a few hundred dollars for a Precision Scale Co. model all the way into the thousands for a Korean-made Key Model Imports locomotive.

If your budget (or your wife) won’t let you spring for a top-of-the-line Key Model Imports or Broadway Limited 4-4-6-4 Q2, Westside Model Co. produced two nice older HO scale models that might fit the bill…

What Happened to the Q2 Steam Locomotives?

As Staufer points out, even though size and power can be determined in many ways, the short-lived Q2 was one of the most powerful steam locomotives of the time – and often loved by her crews.

“Crews were usually reluctant to wholeheartedly accept something as new and radical, but the Q2 proved to be the exception. They were a pleasure to fire, free steaming and good on coal. In addition to riding like Pullman’s, they practically doubled existing tonnage ratings on the Western Divisions where they were king.”

So, if the Q2’s were so exceptional, what went amiss? There were many factors involved, such as: 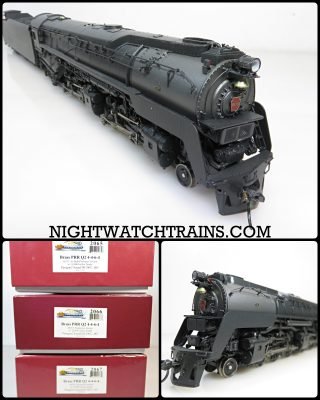 Unfortunately, the year 1956 saw the final Q2 scrapped – today, no example of this magnificent locomotive remains in existence.

In closing, we’ll leave you with some words of wisdom from Pennsy Power: Steam and Electric Locomotives of the Pennsylvania Railroad 1900-1957 …

“The years 1900 through 1957 were selected as our coverage span because they represented the Golden Years of Steam Railroading: the years that most of the well-remembered locomotives were built. The cut-off year of 1957 was steam power’s last year of service, although electrics remain and will probably continue for many years…”

“More importantly, steam memories and nostalgia are preserved herein, and may they live long in the hearts of those who knew and thrilled to stack music and steam whistles.”

Yes, indeed – may the memories of the Titan of the Railroad, the PRR’s Q2 Class steam locomotive, live on forever in the hearts of those who appreciate the Golden Age of Steam…

If you’re interested in acquiring the Broadway Limited Imports PRR Q2 4-4-6-4 seen here, reach out to us. Or, check out our current Broadway Ltd listings here.